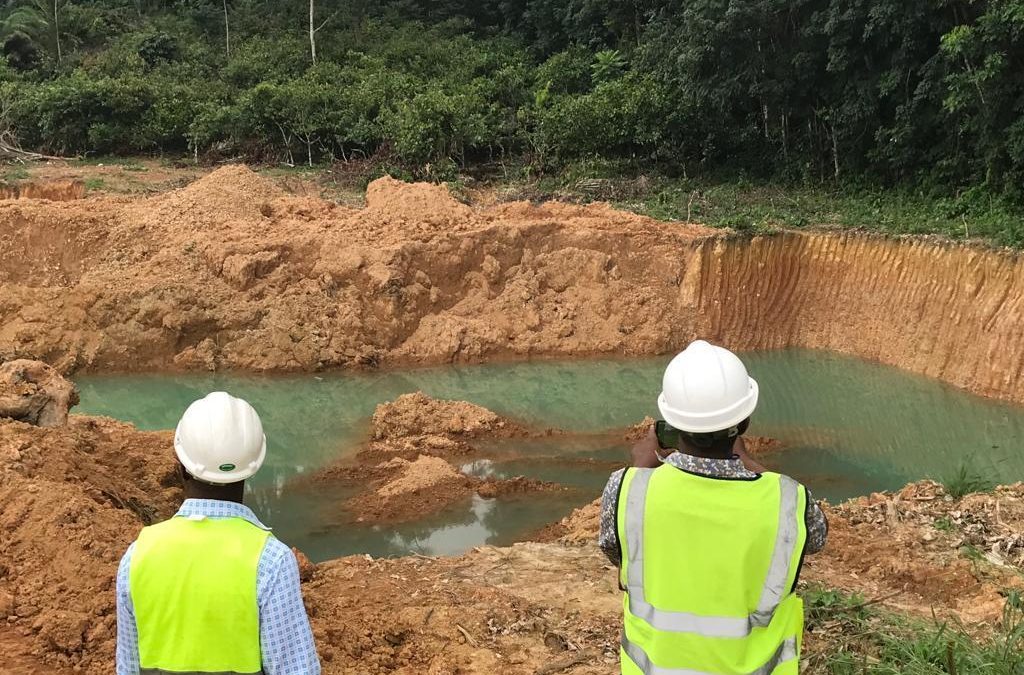 Above: Minerals Commission officials photograph an abandoned mining pit in Segyimase, Abuakwa South Municipality during an inspection in July

The devastating effects of mining in parts of Ghana continue to bring untold hardships and other forms of deprivation to those people in whose immediate surroundings these activities take place, as well as the country as a whole. In some instances, irreparable damage is caused to land as dangerous chemicals like mercury and cyanide, which are mainly used in processing gold and other minerals, find their way into the soil and water bodies. The deadly effects of these chemicals on human lives are scary in the medium to long term.

Even though governments over the years have taken some steps to control the negative impacts of mining activities – both small-scale and large-scale mining – not much has been achieved in that regard. Most of these mining companies fail to cover the open pits they create in their operations, leaving them as death-traps in most instances.

Earlier this year, two young men fell into one of these abandoned pits near Osino in the Eastern region which has culminated in a resolution by the various communities around Osino that three gold mining companies operating in the area should, as a matter of urgency, return abandoned mining sites to their original state after failing to cover hazardous mining pits.

These communities have come together under the Citizen Committee Network (CiCoNet) representing the villages of Juaso, Nsuapemso and Segyimase to leave no stone unturned in ensuring that all mining pits left open are refilled and restored for use again to save human lives and the environment.

The leadership of CiCoNet will be meeting officials of the Minerals Commission in Koforidua this week in a bid to ensure the full reclamation of 13 abandoned mining and excavation sites, especially as there have been reports that one of the companies who created a pit at Juaso has suspended its refilling work.

Mr. Appiah Gyekye Jr, Vice-Chairman CiCoNet is calling for work to be expedited on the issue; saying, “How many more lives we have to lose to see proper reclamation done in our communities by the mining companies?” He was referring to the deaths of two brothers in June, Larbi Grant, 23, and Domptey Bless, 21, of Nsuapemso who drowned in an uncovered pit that had filled with water. The pit was dug and left uncovered by Narawa Mining.

Kibi Goldfields’ reply to CiCoNet’s petition on July 14 claimed it had requested its “service provider,” BSD Mining Services, to fill pits near Juaso, which it claimed BSD Mining had dug. Neither Narawa nor MGR acknowledged receipt of CiCoNet’s petition to fill their pits in Nsuapemso and Segyimase, respectively. Petitions were also delivered to the Minerals Commission, the Environmental Protection Agency, and the Fanteakwa South and Abuakwa South district police stations.

Mining companies are required by law to fill in excavation sites no longer in use through a process called “reclamation,” before they are permitted to begin excavation at new sites. Regulatory bodies such as the Minerals Commission and the Environmental Protection Agency (EPA) are often lax in enforcing reclamation laws unless placed under pressure from the affected communities.

In the absence of institutional support, CiCoNet members have taken the lead and organized their own monitoring at the pit sites to check whether companies are restoring the land as promised. In the first week of September, CiCoNet noted two pits on Kibi Goldfields’ concession in Juaso had been filled in with heavy machinery, and a diverted waterway had been restored at a third pit, though the pit itself remained uncovered. By September 28th, however, residents reported seeing the same heavy machinery used to restore the pit sites now sitting idle in the town center, and CiCoNet has not noted any further reclaimed sites.

In response to the petition, three officials from the Minerals Commission, including the Assistant Chief Inspector of Mines, carried out a fact-finding mission on July 26. They were accompanied by CiCoNet members and representatives from a local non-governmental organization, Advocates for Community Alternatives, which has supported CiCoNet and the three villages since 2018. The group visited a total of 13 pits across the three villages, five owned by Kibi Goldfields in Juaso, two owned by Narawa in Nsuapemso, and six owned by MGR in Segyimase.

The Minerals Commission is expected to take photographs and note down the sites that appeared long-abandoned. At one MGR pit in Segyimase, it appeared mining activities had been carried out without prior approval from the Commission in violation of regulations. In Nsuapemso, the Commission visited the same Narawa pit where the two brothers had drowned a few weeks before, and noted its proximity to the village and water sources.

It is hoped that the Commission will order all three companies to properly restore the abandoned sites under threat of sanctions, and share correspondence with CiCoNet. According to CiCoNet leadership, the Commission has yet to share copies of the letters despite repeated inquiries. Most recently, in August, the Commission claimed it could not produce the letters because one of its employees was on leave.

According to the Commission, the letters were sent and Narawa replied to acknowledge that it failed to cover pits, but refused to begin reclamation processes until after the rainy season. Neither the Commission nor the company elaborated on why reclamation was never completed during any of the dry seasons in the nearly ten years since Narawa dug the pits.

Uncovered pits present various safety hazards to nearby residents, especially during rainy seasons when pits fill with water, pollution, and refuse from run-off. Multiple people have died from falling into pits over the years. Mosquitos and other insects lay eggs in the standing water, which can contribute to increased illnesses such as malaria in the local population.

CiCoNet still remains resolute in taking collective action and seeking the knowledge of the communities’ legal rights to fight against institutional heel-dragging at the Minerals Commission and demand all land be restored to local farmers. The group will continue to work with relevant institutions to hold the mining companies accountable to their obligations to the communities and prevent future tragedies.