Italian energy giant Eni (Ente Nazionale Idrocarburi, or in English, “State Hydrocarbons Authority”) has drilled for oil in and around the town of Aggah, Nigeria since the 1960s. The people of Aggah are of the Egbema ethnic nationality, whose land can be found in the Ogba/Egbema/Ndoni Local Government Area in the Western part of Rivers State, Nigeria. The people of Aggah depend largely on subsistence farming and fishing for their livelihoods.

Aggah borders and overlaps the Mgbede oil field, which is operated by Nigerian Agip Oil Company Ltd. (NAOC), a subsidiary of Eni. In the early 1970s, NAOC created three 40,000 ft2 earthen embankments in three locations to support wellheads, and built raised access roads to connect them. These constructions block the natural streams that used to flow through Aggah, and no adequate drainage channel exists. As a result, the streams back up, and extreme flooding covers Aggah’s farmlands and residential areas every year, typically during the rainy season between July and September. Several people have drowned in the floodwaters over the years. Floods also destroy sewage systems, resulting in vast pollution and harm to the ecosystem.

Aggah’s affected residents formed an association called Egbema Voice of Freedom. With the support of the Nigerian law firm Chima Williams and Associates, and Advocates for Community Alternatives, the group carried out an impact assessment in late 2017 to document harms resulting from the company’s activities that have gone unaddressed for decades. According to the survey of over two thousand Aggah residents, 90% of households have lost agricultural products while over 65% reported severe health problems as a result of the flooding.

With this evidence, Egbema Voice of Freedom submitted a complaint in December 2017 to Italy’s National Contact Point (NCP) under the OECD Guidelines for Multinational Enterprises on responsible business conduct. After the Italian NCP deemed the community’s complaint admissible, the NCP opened a mediation procedure between the affected residents and Eni. The process led to an agreement that was made public on 2 October 2019. The terms of settlement provide for the urgent construction of new culverts or drainage channels, and maintenance and management of the existing culverts to avoid flooding. It also provides for a technical expert to verify the impact of those measures once completed, to determine whether further action should be taken. In March 2021, NOAC had completed building two box culverts and 9 more were at different stages of construction. After the completion of all box culverts, the cut sections of the road will be restored and asphalted. 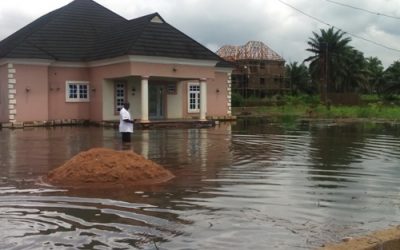 Joint Press Release Port Harcourt, Benin City, Accra, Rome, Paris - 8 October 2019 — After years of battle, residents of the community of Aggah in Rivers State, Nigeria, finally have hope for relief from the floods that have plagued them for five decades, thanks to a...