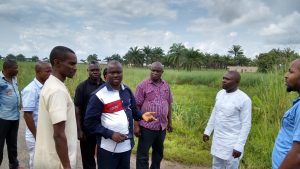 For decades, the community of Aggah in Rivers State, Nigeria, has suffered from floods caused by elevated embankments that were built by the local subsidiary of Eni S.p.A., the Italian oil giant. Each year during the rainy season, local streams that used to flow through the area encounter Eni’s constructions, back up, and inundate the village. The floodwaters destroy homes, wash away crops and livestock, and devastate the health of many Aggah residents.

Villagers have been asking Eni for relief for years, but the company has turned a deaf ear to their pleas. Eni is even ignoring the Rivers State government, which has tried to enforce its sanitation and public safety laws to end the floodings. Aggah residents’ requests are simple: build a drainage system that will allow the floodwaters to pass through, and assist those people who have suffered as a result of the floods.

Together with PILIWA network partner Chima Williams, ACA is supporting the villagers to raise their voices and take control of their own fate. We helped them to design and conduct a community impact survey that demonstrates how over 90% of community members are affected by the flooding, and we are representing them in a complaint to the Italian and Dutch governments. This complaint argues that Eni and its Dutch subsidiary, Eni International BV, are violating international norms of responsible corporate conduct and contributing to human rights violations by allowing the floods to continue. We hope these governments will help bring Eni to the negotiating table to find a solution that protects the rights of the people of Aggah. 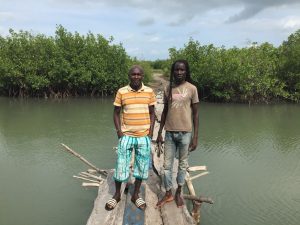 Australian/Hong Kong mining company Astron Ltd. is poised to begin digging for zircon in the metal-bearing sands of Niafrang, in the southern Senegalese region of Casamance. Astron obtained a final exploitation permit in May 2017, after an environmental impact assessment process that was biased and incomplete, and a community consultation process that deliberately excluded opponents and representatives of the most affected areas and misrepresented their inputs.

The site is at the heart of a very rich but also very fragile ecosystem that is unique in Senegal – an intersection of ocean, mangrove forest, coastal dune, and low-lying coastal plain that locals use for rice paddies, palm groves, and their villages. The mining project threatens to weaken and undermine this ecosystem by destabilizing the dune – the only natural barrier that protects villagers’ rice fields and homes from the intrusion of salt water – threatening the shallow aquifers that are the community’s only reliable source of fresh water and putting at risk the mangroves that support a unique biodiversity. Not only is an exceptional natural environment at stake, but also the resources that thousands of locals depend on for survival.

All this is unfolding against the backdrop of a decades-old civil conflict in Casamance, which is in large part a fight over access to land, economic opportunities, and natural resources. Leaders of the separatist Movement of Democratic Forces of Casamance (MFDC) have publicly opposed the project as a pillage of Casamance’s natural resources and have declared that they would consider any move to start mining operations an act of war. Company representatives can only visit the site escorted by heavily armed soldiers, whose presence further alienates the locals. Villagers risk being caught in the cross-fire.

ACA is helping the community of Niafrang to develop a legal strategy that will challenge the company’s operating permit and halt the destruction of the dune. This is just one prong of a comprehensive strategy to fight the project and its impacts and promote promote alternative, sustainable, community-appropriate livelihoods in Niafrang.

Fact-finding and Reporting in Kintinian, Guinea

In 2015, South African mining giant AngloGold Ashanti decided it was time to expand its footprint into Area One, a zone of Kintinian in northeastern Guinea, but local community members were strongly opposed. The company went ahead anyway, conducting an Environmental and Social Impact Assessment and a Resettlement Action Plan without ever consulting those who were to be relocated.

In the ensuing months, AngloGold and Guinean security forces brutally compelled community members to go along with the relocation. A delegation of elders and community leaders that was sent to negotiate with the company and government was arbitrarily arrested and detained. A series of demonstrations were violently repressed, with members of Guinea’s “red beret” special forces firing tear gas and live bullets into the crowd, burning buildings, and looting people’s homes. Then company representatives went door-to-door to conduct an inventory of people’s homes and household goods, escorted by members of the very same military units that had violently suppressed the demonstrations.

Eventually, all the residents of Area One were coerced into moving to a relocation site – mostly against their will, and largely because of pressure applied by local government leaders. This site, however, was poorly prepared – for example, the site does not have adequate access to water, and the houses lack toilets.

ACA – along with Communities First and the Guinean organizations MDT and CECIDE – conducted a participatory survey and fact-finding mission. We confirmed that community members had been coerced to leave their homes through violence and intimidation and that the resettlement agreements they signed had never been explained to them. The results of this activity were published and shared at a press conference in Guinea in February 2017.

With the support of Inclusive Development International and the 11th Hour Project, residents of Area One have reached out to AngloGold’s investors and taken a complaint to the International Finance Corporation (IFC), which finances AngloGold’s mining operations in Guinea through its investment in a South African Bank. Residents are currently waiting to see if the IFC can successfully mediate a solution to their suffering.