ACA works with selected communities facing the environmental and human rights consequences of extractive activities.  We assist each community partner to articulate a sustainable future that fits with its unique vision, needs, and culture. We then work in partnership with other organizations and professional resources to provide to each community the information, capacity building, and legal and technical support to advocate for its chosen development trajectory.

We do this through: 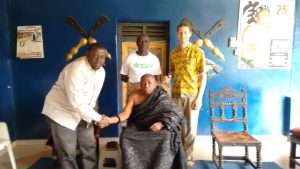 ACA began its community-driven development work by helping four Ghanaian communities maintain their resistance to large-scale gold mining by advocating for a better future that they chose themselves.

In April 2017, ACA and the villages of Donkro Nkwanta, Salamkrom, Nwoase, and Kyeredeso – all in the Nkoranza South Municipal Assembly of the Brong Ahafo Region – agreed to work together to pursue alternative development pathways and advocacy strategies that would keep the villages safe from the threat of mining. These communities had successfully fought off an industrial gold mining project by Newmont Mining in 2011, but they still felt vulnerable to the future threat of extractives-led development. Over the course of discussions with ACA, community members disclosed that they no longer felt unified, that there were divisions between settler populations and the indigenous people, that women felt marginalized and that the communities rarely met to make developmental decisions for themselves.

ACA adopted the Facilitated Collective Action Process (FCAP), a Community-driven development tool developed by SparkMicroGrants in Uganda that gives communities the opportunity to design and implement their own goals for the present and the medium-term future. Spark trained ACA staff in the core FCAP methodology, and together the two organizations designed additional modules focused on advocacy and community defense.

The FCAP, which lasts for three years in each community, is an intense, participatory series of weekly facilitated activities through which communities are guided to build unity, set realistic goals, develop proposals to achieve those goals, and then implement projects that bring them closer to their vision of the future. Midway through the process, ACA provides a “microgrant” to each community to support the implementation of the community’s first vision-oriented project.

The key feature of the FCAP is that while meetings are facilitated by ACA, the communities themselves are truly in control of every aspect of the process. They set expectations, enact ground rules and by-laws for their work, elect leaders, and make every decision by themselves. Women are strongly encouraged and supported to express themselves and participate in decision making, leading to more inclusive and participatory outcomes that reflect the will of the entire community.

Our community partners are not satisfied with merely pursuing their own development goals; they have also insisted that the Ghanaian government recognize and respect their aspirations. In pursuit of this goal, the four villages each designed a Community Vision Board (CVB). The CVB identifies a community’s top five goals and depicts several developmental projects that could help them achieve each goal. Communities have also identified stakeholders who may undermine or support their goals and develop comprehensive strategies to advocate with these stakeholders to achieve their goals. The CVBs have been converted into community development narratives that were incorporated in the current Medium-Term Plan of the Nkoranza South Municipal Assembly – a first in Brong Ahafo Region and possibly in all of Ghana.

Already, the FCAP has had a long-term impact on the well-being of the four communities. Through their weekly meetings and the newly acquired habit of collective action planning, our communities have healed internal political divides, reached out across ethnic lines to build a unified vision, and  for the first time prioritized the development goals of women. Through the FCAP process, one community found the courage to stand up to intimidation and trickery by a traditional chief who wants to expel them from their land. Another began building its own infrastructure projects without waiting for external encouragement.

All four of these original communities chose to resist the Ghana National Petroleum Company when it tried to conduct seismic testing on their land.

These examples of unification, strengthening, and inclusivity will give the communities long-term capacity to resist destructive forces and pursue their own chosen development pathway.

Communities Choose How to Use Their Microgrants

ACA earmarked $9,000 USD to support each of the communities’ development visions, with Donkro Nkwanta receiving a double grant due to its relatively large size. The communities are using these funds – along with their own cash and in-kind contributions – to implement and operate a project that will help them achieve the development goals they chose through the FCAP process.

Nwoase– a community of 800 – used the microgrant to build teachers’ quarters to improve the quality of education in the community. Now that the accommodations have been built, teacher absenteeism has dropped and parents have been able to bring their children back to Nwoase from other villages, where they were boarding in order to attend higher-quality schools.

Salamkrom– a community of 1,200 – used the microgrant to build health workers’ accommodations. Salamkrom already has a health center but has been struggling for over eight years to get health workers posted to the community due to the lack of suitable living quarters. Now that health workers are lodged in high-quality bungalows, the Ghana Health Service has upgraded the clinic’s status, and it is now host to a nurses’ training program.

Donkro Nkwanta– a community of over 6,000 – used its microgrant to build a community center where community members will have periodic meetings and organize other events to generate income for the implementation of other projects on their Community Vision Board.