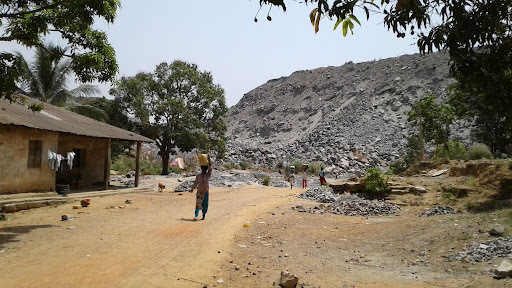 August 19, 2021 – New York – If Sia Janet Bayoh and other members of the Marginalised Affected Property Owners (MAPO) have their way, a trove of documents produced in a multi-billion-dollar battle between international mining giants will help them rebuild their lives and livelihoods, which have been shattered by the abusive diamond mining operations of Octea Ltd.

For years, the members of MAPO – residents of Gbense and Tankoro Chiefdoms in Koidu, Sierra Leone, have lost their homes, farms, and livelihoods, and suffered pollution and health problems, due to the Koidu Mine, operated by Octea subsidiary Koidu Ltd.  Bayoh lamented the destruction of the community: “We used to farm and live in peace, but now our lands and water sources are poisoned and covered in rubble. Our homes are shaken by explosives every day.”

In April 2019, MAPO and many of its members filed suit against Octea and Koidu Ltd., several of their affiliates, and their Managing Directors, in the courts of Sierra Leone.  But the convoluted structure of the BSG Resources Group, which includes the defendant companies and stretches across several notorious offshore secrecy jurisdictions including the British Virgin Islands, Guernsey, and Liechtenstein, has proven a major challenge.  “Octea has tried to use its international status to hide from its obligations in Sierra Leone before, and we know they’ll do it again if they get the chance,” said Benedict Jalloh, Principal of C&J Partners and counsel for the plaintiffs.

A move by BSGR to declare bankruptcy in order to avoid its multi-billion-dollar arbitral debt to a former business partner, Brazilian mining giant Vale, further raised alarm bells.  “Courts have found that BSGR moves its subsidiaries around like in a game of Three Card Monte, using its global reach to hide documents and assets from creditors,” said Jonathan Kaufman, Executive Director of Advocates for Community Alternatives, which supports the plaintiffs in their pursuit of justice.  “This bankruptcy is just another strategy to frustrate creditors such as the Sierra Leone plaintiffs, putting assets out of reach and making it impossible to satisfy the judgment in case MAPO wins the lawsuit.”

As the lawsuit finally moves toward trial by the end of the year, the plaintiffs have filed a Foreign Legal Assistance petition in the federal courts of New York seeking evidence that may be unavailable in Sierra Leone.  “While Octea may be able to hide evidence from the court in Sierra Leone, BSGR couldn’t hide from its in bankruptcy proceedings in New York, where they have turned over copious evidence of how their assets are held, how their Sierra Leone operations are governed, and what their liabilities may be,” said Joseph Ansumana, Kono District Manager for the Network Movement for Justice and Development, which advocates for the local community.  “All this will help us ensure that the right parties are held responsible for the environmental and economic devastation Octea has caused at Koidu.”